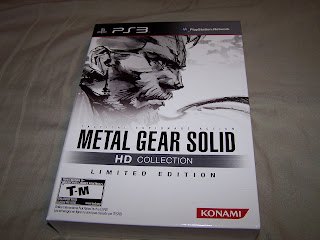 The following is a review of the Limited Edition of the Metal Gear Solid HD Collection. This is not a review of the actual game as you can likely find many such reviews all over the internet.
Picking up the Game (skip past the italics if you just want to read the review):


A funny thing happened on my way home from work. I went to the local Gamestop to pick up my fully paid off pre-ordered copy of MGSHDLE (pictured above) and I was greeted by a parking lot that had been taped off to make room for a line of people waiting in line to buy Modern Warfare 3. This was no midnight release either. It was regular ol' release day at around 4pm.


Well, the last thing I wanted to do was wait what could have been up to an hour in line behind a mass of parents buying a mature rated game for their middle school aged children. Luckily, rumor in the line was that as long as your pre-order was paid in full, you could cut to the front of the line. That's right, the line was long enough to have rumors.  Thankfully, the rumor was indeed true. I cut to the front and showed the employee my receipt and said, "It's not for MW3." He smiles and says, "Thank God." He then takes a look at the receipt and tells me that MGS is the one he's going to pick up today too. Such exchanges are why I love my Gamestop store.

Anonymous said...
This comment has been removed by a blog administrator.
6:58 AM

Thanks for this review. I'm just thinking about buying the LE for the art book. I already have the original MGS (PSX) art book (...wait for it... signed by Kojima and Shinkawa) so I didn't want to buy a rehashed version of the book.

I agree that glossy paperstock doesn't quite suit the art style but if this is completely different from the art of MGS 1.5 and 2 books then I think I'll take a punt.

Also agree on info on each piece/motivations would be great but hey-ho...

just stopping by to say hey